Ducks with Down Coats

Well, that took longer than expected. I guess I don't have as much free time as I thought I did. It snowed today, so I'm posting this anyway - even though the calendar says it's spring, the outside does not.

This time of year we often think most of the birds have headed south, but in fact here in the Great Lakes area we ARE south for a number of different arctic and northern species, particularly waterfowl, gulls and owls. Because I'm a lucky duck and get to do cool (and cold) things at work I spent a lovely, sunny, -20C day surveying for winter waterfowl. In the "how was your day" part of dinner it sparked a conversation with Beans and Bunny on how those thousands of ducks I just counted stay warm floating on ice water. 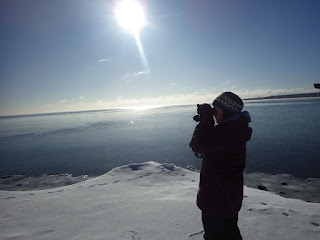 Our lake does it's best to freeze solid. There are open patches, particularly near the outflows of streams or stormwater outlets, and some areas where it's kind of a slushy ice/water mix. On anywhere that is not frozen solid you will see ducks. LOTS of ducks. Anywhere that is frozen solid you will see ice fishermen, but that's a whole other story. 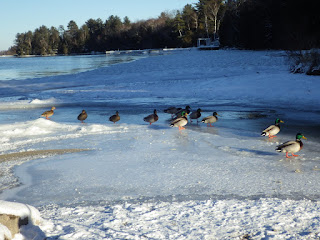 The ducks are pretty happy in the frigid water. So much so that they are preening, splashing about and diving under for food while for people - well, some of us have our 10 second "polar bear dip" and the rest of us think those guys are crazy. 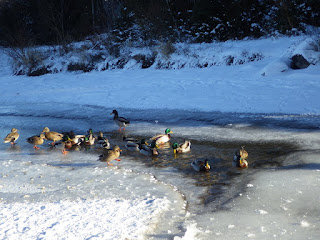 So why aren't the ducks freezing? Why aren't little duck firemen taking them to warming huts after their swim?

First, bird feathers are one of the best insulations around. Which is why we steal them and make coats and snuggly duvets. Birds "fluff" themselves up in the winter to amplify this effect - trapping air between the feathers and their bodies which warms up and keeps them toasty. It's like they are constantly wearing a parka at all times. Humans pay hundreds of dollars for Canada Goose jackets, an actual Canada Goose just gets one thanks to nature, only no fur collar. They will stick their heads in their feathers to breath warm air and also tuck their legs in to warm up as well.


Which brings me to the second reason - feet. There are very few muscles in a duck foot - it's all tendons. This means very little circulation is needed to keep them warm. They've also got this really cool (pun slightly intended) system called counter-current heat exchange where the warm blood passes closely by the cold blood during circulation. This allows them to minimize the heat lost through their feet as the arterial blood travelling to the feet gets cooled and can't loose much to the icy water and the venous blood travelling back up gets warmed and doesn't bring the cold back up to the body. This means they actually can have two temperatures at the same time - one for their core and one for their feet - which can actually be close to freezing.

Now I know my feet are cold on a winter night, but this is taking it to the extreme.