Bunny has been losing teeth for a while now - with 8 now having gone under the pillow. Naturally this has brought up some teeth questions such as: How many am I going to lose? (Quickly calculated as how much money can I make off this "tooth fairy" character). How many teeth does the cat have? How come some are pointy? Etc, etc... These discussions usually end with Beans desperately yanking on her teeth in hopes that she'll get a toonie under her pillow shortly. This has recently increased with one of her buddies losing 3 in the past week.

Humans have 20 primary teeth (also called baby or deciduous teeth) and 32 secondary (permanent) teeth. Why the difference - we don't have the same amount of molars as a baby and there's an extra set of bicuspids that come in, and those just come in at various times and we keep them, and there's the whole wisdom teeth thing. Only the first set of teeth fall out so, if all goes according to plan, there will be 20 visits from the tooth fairy. The crazy thing is that they are all in there, some of them are just hiding and waiting!

Tooth strategies go along with eating strategies. There are the three basics - carnivore (meat), omnivore (everything), and herbivore (plants). Then there's some specialties within those - like insectivore (insects) and piscivore (fish) in carnivore and gnawers (rodents) vs grinders (deer, cow, moose, etc) in herbivore, but for the most part mammals fit into one of those three main groups. Humans evolved as omnivores - so we have teeth for tearing and biting, but also ones for grinding - pointy in the front, flat in the back (like the bear below). Think about the different ways you would eat different types of foods - we thought about chicken drumsticks vs salad - and how you used the different parts of your mouth for different eating "jobs", you couldn't chew lettuce with your front teeth or tear chicken with your back ones. And as Bunny pointed out, ice cream doesn't need teeth, so if she loses more she could just eat ice cream. Nice try Bunny - icecreamivore isn't a thing.

I asked the girls to each pick an animal so we could look at it's teeth. Luckily they each picked very different ones, although both are mammals, so we're not looking at two of essentially the same thing. That could have totally backfired on me!

Bunny's Choice: Chipmunk
I think this choice is influenced by our extraordinarily busy chippy that lives in the yard and fills our downspout with stuff. He's been whipping around lately getting ready for the snow and has dug a cache in our plant pot out front (which reminds me I should get the mittens out as we've already had some frost). Bet you all thought chipmunks were herbivores (Bunny did) - well you all would be wrong! Omnivore! They eat bulbs, seeds, nuts and grains but also insects, worms, frogs and bird eggs. However, as it is mostly seeds, cones, and veg based, they do have the continuously growing prominent front teeth of the rodent family - because of the amount of "nibbling" they do, rodents wear out their teeth quickly so the continuous growth means they always have something to bite with. Along with their four sharp, chisel-like incisors, they have flat back grinding teeth as well.


Beans' Choice: Lion
I assume this is prompted by our recent zoo visit at which lions and elephants were her clear winners. Personally, I thought the hippo who did a sashay runway walk for us was quite delightful. Lions have 30 teeth, so pretty close to us. That's pretty much where the similarity ends though - Lions, and cats in general, eat pretty much one thing - meat. Unless you are our cat Havoc, in which case you also include house plants, strawberry tops, lettuce and the much coveted "outside grass". They only have tearing teeth - everything is pointy with no flat "grinders". A lion's back teeth are like a pair of scissors which basically cut up whatever zebra or wildebeast happens to be dinner. There is no chewing at all - they basically swallow chunks (which is why I suppose when Havoc throws up the plants that they are indeed in chunks).


Oh yeah - domestic cats have 30 adult teeth, they have 26 baby teeth and lose them. So somewhere out there is a feline tooth fairy leaving sardines under a pillow.

Here's a super fun game about teeth! (click it for a bigger version) 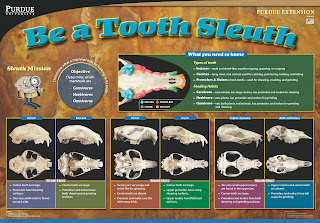