Bunny is a pumpkin fanatic – pie, ice cream, muffins, roasted seeds, jack-o-lanterns...even she’s impressed with their versatility. Beans is currently obsessed with apples, but don’t mess with them – just whole please. This sparked a debate on what was fruit versus vegetable and the realization that what things actually are is not what we call them.

In the botany world pumpkins and apples are both fruits, even though in culinary terms pumpkins and their squashy relatives get called vegetables. This happens a lot – there’s quite a disconnect between what we call things in food related terms versus their actual botanical classification. In the plant world not all fruits are edible, but I would assume that chefs don’t bother classifying inedible things. For example dandelion fluff and maple keys are both fruits.

Fruits, in plant science terms, are the parts of the plant that are formed from the actual flowers and ovaries. Once the flowers are done and pollinated they magically (ok not really, science only seems like magic sometimes) turn into fruits.

More on the structure and function of flowers

Fruits serve a specific purpose – spreading seeds around. That can happen by a variety of methods - floating around (milkweed), sticking to your socks and travelling (burs) or being eaten and carried by various animals and being dropped (or pooped!) elsewhere (apples!). Because of these relationships fruit and animals are dependent on each other – this is a symbiotic relationship (any relationship where we get pie is good in my books). 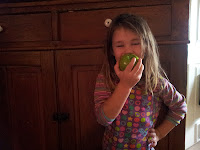 Beans being symbiotic with an apple

Apples are in the family Rosacae and are a fleshy, simple fruit called a pome. The core is actually the important part to the plant formed from the ovary, the delicious part we eat is just extra tissue from the flower petals and sepals that fuse with the ovary wall that evolved to make us want to eat and disperse.

The ovary forms three parts – the endocarp surrounds the seeds and is hard, the mesocarp is next and is fleshier, the exocarp (not pointed out in these pictures but you can see the line) surrounds that and together they form the core. We eat the hypanthium that surrounds the whole deal, and sometimes accidentally we eat parts of the hard endocarp and spit them out dramatically (at least Beans does).

Pumpkins are the fruit of Cucurbitaceae plants. The fruit is actually a modified berry called a pepo that has a thick outer rind. Berries are simple fruits where the seed and flesh is formed from a single ovary. Other common berries? Avocado, watermelon, blueberry, cranberry and tomato. What’s not a berry? Strawberry (accessory fruit), cherry (drupe) and raspberry (aggregate fruit). So once again what we call things in real life versus what they are botanically makes no sense. 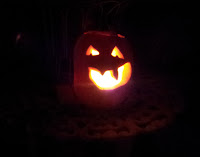 Bunny’s very first no help at all carved Halloween berry

I can’t find a decent picture of the parts of a pumpkin so here’s a watermelon, just to prove it’s a berry, because I got a seriously unbelieving face from Bunny. She was quite willing to accept that pumpkins were a berry but watermelon was a little out there for her. Same deal though – the ovary forms three parts but in this case there is no surrounding tissue that forms the edible part (why it’s a berry and not a pome). The part we eat here is the mesocarp and the exocarp is the hard rind that makes an excellent jack-o-lantern. The endocarp isn’t shown in this one but it’s there surrounding the seeds.

We all agree though, no matter what you call them – they are still delicious. So whether cooked or raw, pie or plain – we will continue eating lots of fantastic fall fruit (I just wanted to do the alliteration again).