I don't normally do "lifestyle" type posts, but this one is kind of a crossover as Beans chose a nature theme for her 6th birthday party this past weekend, so I thought it might provide some nature themed activities in case anyone wants any. We planned for a nature hike with some bird-friendly activities, a plant pot craft and a chocolate mud puddle cake. The weather was less than cooperative, with snow in the morning and temperatures hovering around 0C for the day, but that didn't stop the determined little group of girls from tromping over to the park to help out the birds, who with the late thaw this year could probably use a little assistance.

As her guests arrived the birthday girl greeted them with her Red-tailed Hawk. She thought up the glove thing herself, which I thought was awesome (also awesome is this nest cam!). When you squish him he even makes the real call. 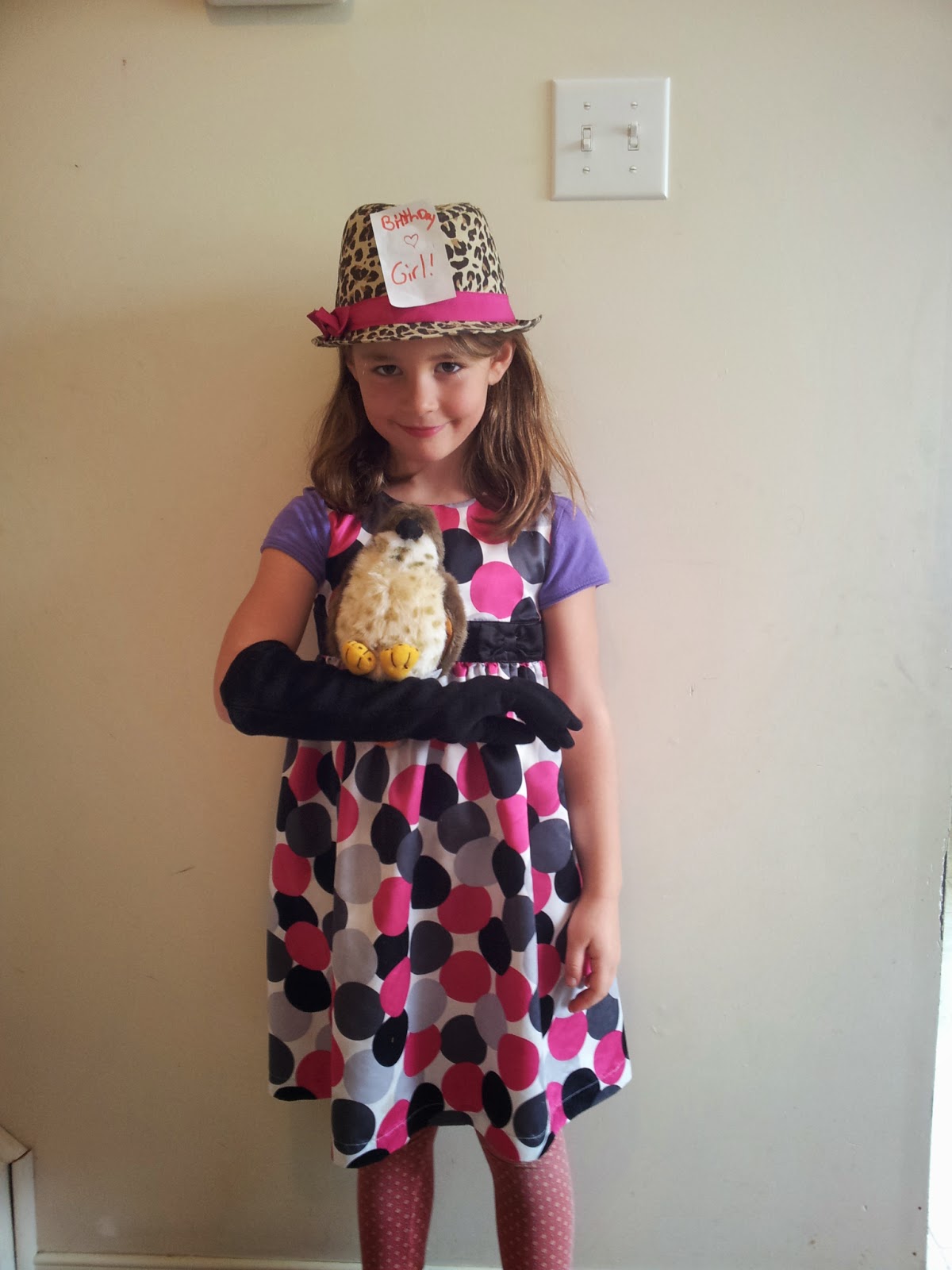 She then took them on an indoor "nature viewing" in our living room, where Beans and Bunny had set up a number of stuffed animals.


We then tromped over to the park around the corner, which as it turns out was covered in ice. On the way there we used field journals to record all the signs of spring we saw - words or pictures, depending on ability. Since there weren't many we ended up with a list that was something like "bird nest from last year, old leaves, grass, rocks, mud, puddle, water, melting snow". We also may have stomped in a LOT of puddles.

We brought a bag of black-oil sunflower seeds, which are pretty much the best all-purpose bird seed out there, and a bunch of paper cups and the girls had a great time sprinkling them (flinging them) all over the grassy and treed areas (ok, on the ice too and maybe some in the playground... and along the street back to our house. There are now a lot of seeds in our neighbourhood). 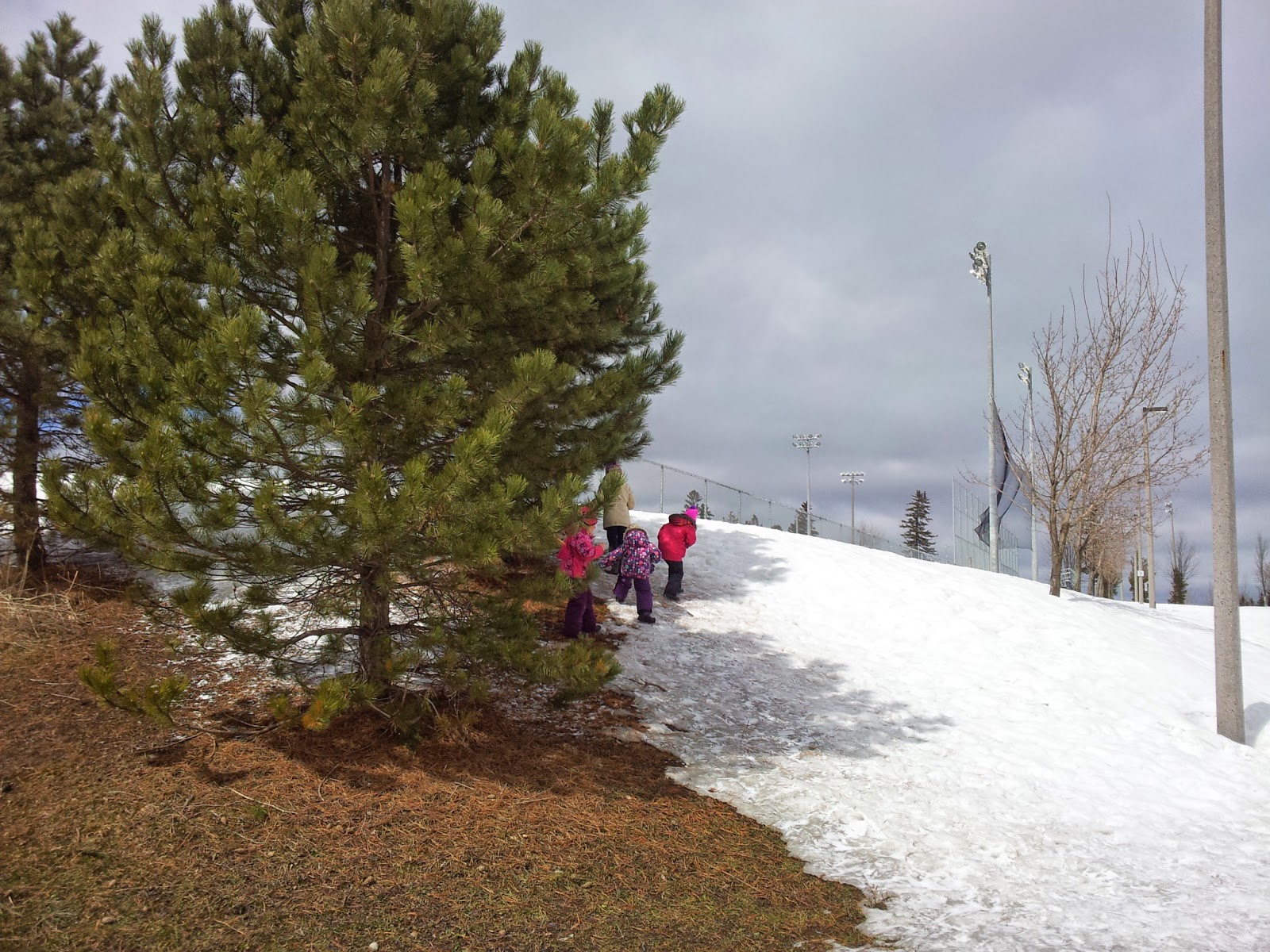 After we had sprinkled to our hearts content we gathered up a whole lot of sticks, grasses, pine needles and assorted other things we thought birds might like to make their nests out of and trucked them back to our yard and made a giant (ok, giant is a relative term here) pile of nesting materials for the birds to choose from. We also added pink, purple and blue yarn in case they need something wuzzy, because it's pretty cold out at night. The added bonus of this is that the kids can look for their coloured yarn in birds nests in the neighbourhood. If you have a backyard tree you can hang the material from the branches or in a net bag, but we don't, so we went with a pile. Beans has promised her friends to report on who comes to take the goodies. 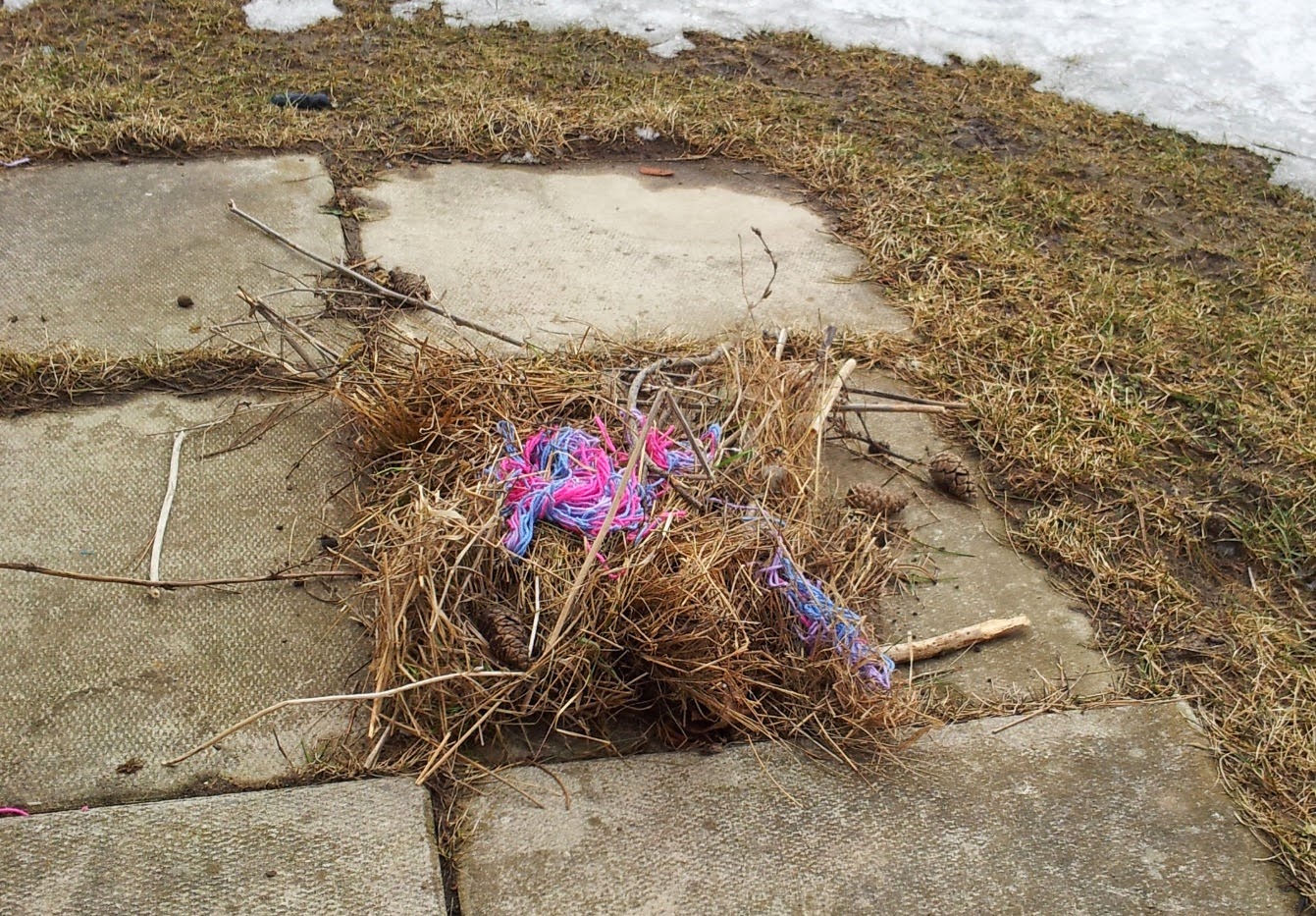 Back inside to warm up decorating plant pots with some bling and some juice, snacks and an impromptu tissue paper/stuffed animal dance party. 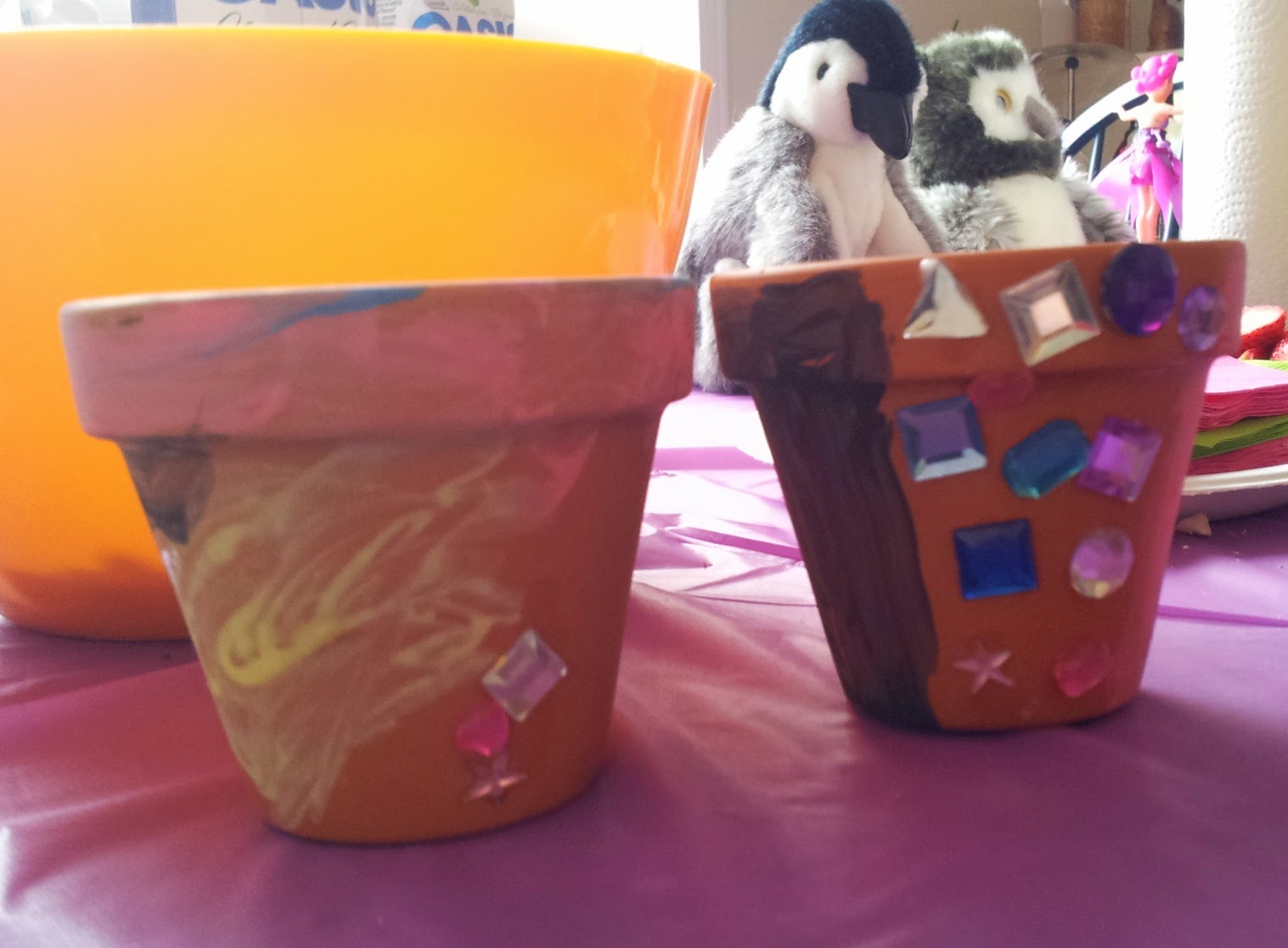 And no party is complete without "cake", or in this case a delicious chocolate mud puddle (brownies and pudding). 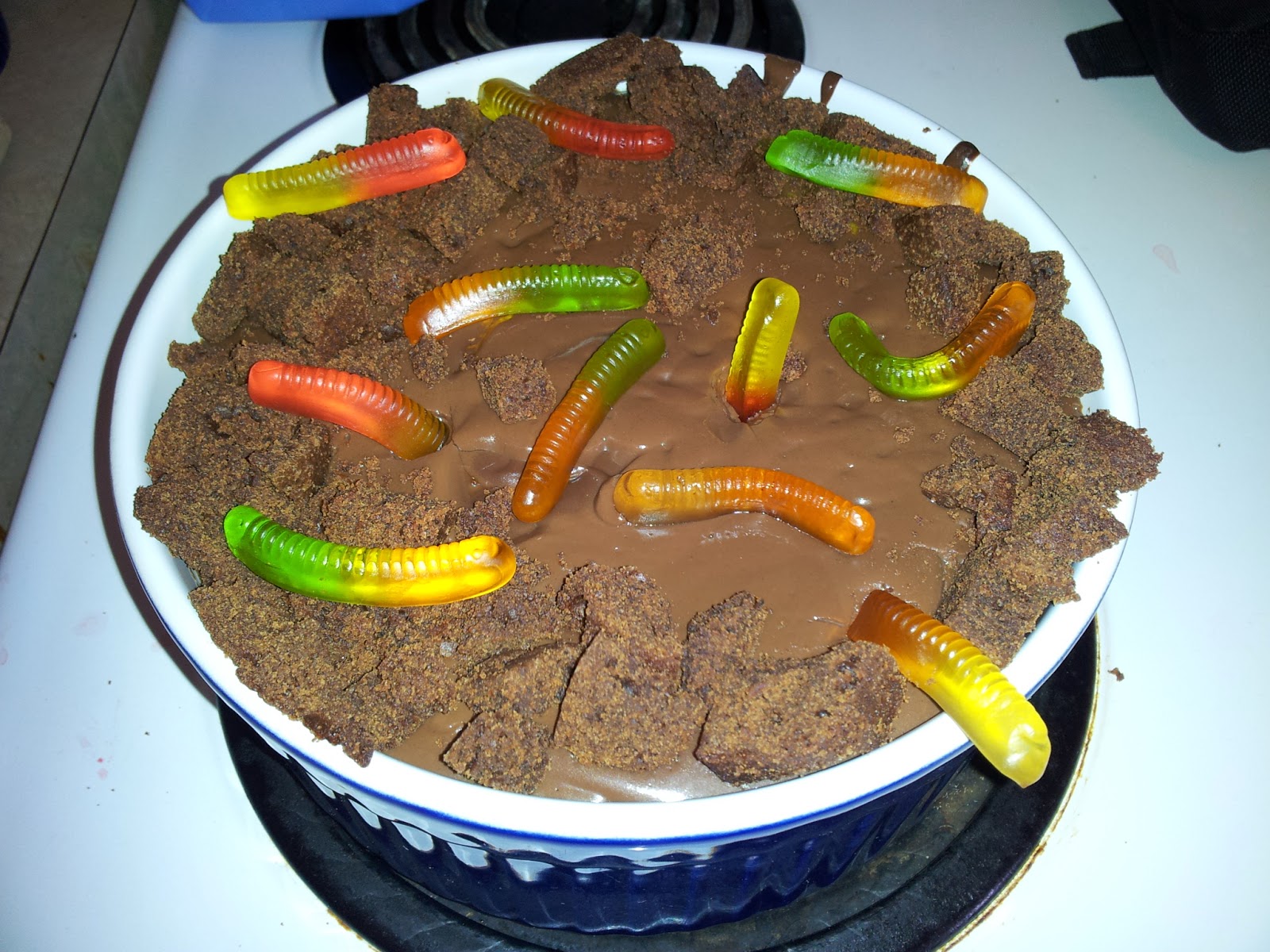 Despite the weather it was an awesome afternoon, which I think goes to show that kids really don't care what the weather is, they just like being outside. I know Beans and Bunny sure do.