We are about to embark on a road trip. 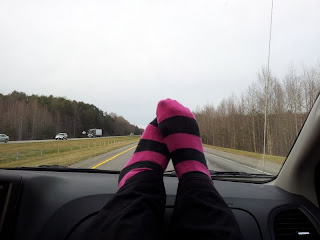 We all love road trips except for one small snag...

It sucks. I know this because I get carsick too. As a kid there was many a long trip that was interrupted by pulling over to the side of the highway so I could rid myself of lunch (or on occasion, lunch ending up in my lap). It is way worse when you try to read anything, even maps. I'll pretend this is why I get lost a fair bit. Beans does not get carsick and this is horribly unfair, but she got her dad's "I can do anything in the car, look while I read this novel without puking" gene.

So we travel with a bunch of emergency green bin bags in the van, because that's a better option than your hoodie when you can't pull over fast enough. Note: we use biodegradable green bin bags so that I don't feel guilty about leaving them in a ditch because apparently other people aren't really into the idea of driving a bag of puke around until you find an appropriate disposal can. Yes, we throw up enough in the car to have this be an actually discussion we've had. And strangely, after all that - we all still love road trips.

The setup made this one pretty obvious eh? Why does Bunny get carsick?

About 33% of people get motion sickness, which results in nausea, dizziness and vomiting. And it has nothing to do with our stomachs at all. It has to do with our ears. Yeah - Bunny didn't believe me either.

Your body's sense of balance and spatial orientation is managed by the vestibular system. It's located in the labyrinth of the inner ear (bonus points if that made you think of David Bowie). This is why when you have an inner ear infection you can get dizzy and stumbly.


That crazy mess of tubes there is why you can stay upright and move around without bonking into things. It also knows when Bunny is doing cartwheels and adjusts her brain accordingly, which is good because that is ALL THE TIME. It's also why in something like an elevator, where you can't see you are moving, you know and feel like you are.

Which is where the motion sickness comes in. In a car you are not moving, the car is moving, but your body is not. So if you look in the car you see you are not moving, but if you look out the window you can see that you ARE moving. Are you confused? Because your labyrinth is! That discrepancy ends up in your brain as a confused message and that's what causes the symptoms. The theory is that your body is trying to rid itself of a toxin it thinks is causing the confusion - so hence the tendency to rid yourself of everything and anything in your stomach. The good news is that it's usually the worst in children 2-12, so hopefully it lessens as time goes on.


There's a few things that can help - fresh air, gravol, not reading, looking at the horizon...some treat the nausea itself and some try to alleviate the confusion. Ginger and mint are said to help, and ginger is being rather thoroughly studied as a nausea treatment, which only strengthens Bunny's ongoing love of ginger ale and peppermint gum. Much to her (and Beans') delight we've also discovered focusing on a movie in the car also does the trick, along with lots of stops to breathe and run (and purchase more ginger ale).

So here's to hoping we make it to Wisconsin with limited bag use.