My apologies for the black hole of blogging that was March. Between a trip to Florida and helping organize (and playing in) a hockey tournament, the chance to write has eluded me and the questions are building up. Now that I can't move from playing 9 hockey games in 3 days I might as well start writing as I'm fairly sure my hands are the only thing that can still move with minimal pain.

Now, back to SCIENCE! (said in the Magnus Pyke voice of course).

Bunny LOVES the ocean. I don't even think love in bold capitals is strong enough for the emotion she feels when she sees it. She's drawn to it, she can't just be next to it, she needs to be in it. For example, we stopped to have an ice cream on the beach and she ran in fully clothed ("I was testing the water and the wave just hit me").


We live in the Great Lakes area so, while we are surrounded by water, usually water means freshwater. However, on our recent trip to Florida, Bunny and the ocean were together a lot and it brought up some questions for her about why ocean water was different than the lakes here. While she is an avid beach fan at home as well, it's not the same as running in the surf of the Atlantic Ocean. In particular, while the ocean is awesome, contains cool shells, waves and surfers, it doesn't taste that great. It's a bit salty.

We've talked about the water cycle before and they've seen enough environmental presentations (both at school and because I'm nerdy and take us to that kind of stuff in our free time too) to know how water gets into lakes and rivers and eventually makes it into the ocean. But that water doesn't have salt - so where is the ocean salt coming from?


All water has dissolved minerals and "salts" in it. And if Nemo has taught us anything it's that water eventually makes its way to the ocean, whether from rain, rivers or dentist offices. The types and concentrations of these are what makes the water fresh or saline, and it varies on the location and method of water accumulation. So what we consider "fresh" water actually still contains these dissolved salts and minerals, just in different concentrations and configurations so they aren't "salty" to taste. As for ocean salt, high concentrations of Sodium (Na) and Chloride (Cl) - around 85% of the total dissolved solids compared to less than 16% in rivers - makes it taste the way it does. And general consensus seems to be that there are two main ways it gets there.

1. Rocks
The rain that falls contains dissolved carbon dioxide from the air, causing it to be slightly acidic (this is not acid rain which it is a whole other kettle of fish, this is plain old regular rain). This erodes the rocks it falls on and causes those minerals to be carried with it along it's path to the ocean - whether that is through groundwater, lakes, rivers or simply raining next to the ocean and running back in. This isn't just sodium and chloride, it's also silica, calcium, magnesium, bicarbonate - there's a whole whack of stuff in there.

So while the lakes and rivers get all the stuff from the eroding rock, they don't have volcanoes or the original sodium stash, so they don't have the same amount of salt.

The salinity of the ocean is pretty stable, and has been for billions of years. The salt basically goes about it's little cycle of moving around and becoming rocks and then leaching back out again, so it's generally at 3.5% salt (35 parts per thousand - ppt). This means if you were to take 1L of seawater it would have 35 grams of salt. But this varies from place to place - The saltiest water is in the Persian Gulf and the Red Sea (about 4%), because, well - it's hot there and there is more evaporation so a higher concentration. Cold areas have less due to glaciers and ice melting, less evaporation and usually higher freshwater inputs from land. The Baltic Sea ranges from 0.5-1.5%, the Black Sea is around 2%. Also areas near the mouths of rivers have less and there are often "brackish" low salinity areas where they meet the ocean - these result in some really cool diverse swamp areas that you can wander around while you are in Florida and other people are playing golf.


So there you have it. Oceans - awesome to play in and delicious when evaporated and sprinkled on a nice fresh tomato. 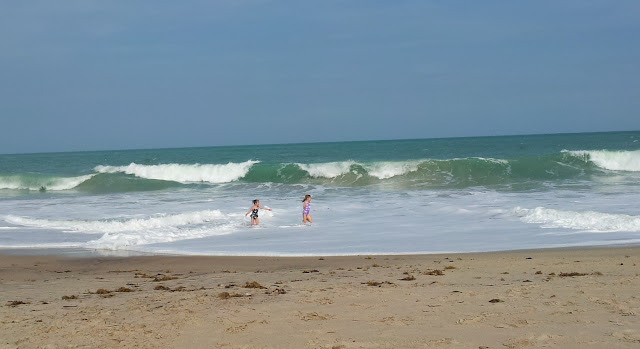 Where we learned stuff from: