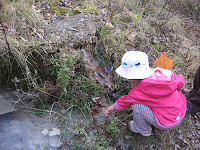 A little Beans with a lovely oak leaf


We're lucky to live somewhere with a beautiful autumn. People travel from around the world to see fall in central Ontario. Reds, golds, oranges, yellows (yes, it's different than gold) and browns and the hilly landscape gives spectacular views. This fascination with colourful leaves starts early and often manifests itself through obsessive leaf collection. Because you never know when you might see another red leaf quite as pretty as that last one. And of course you then need to glue it to something.

A little Bunny with a lovely oak leaf

You can see the question coming can't you.

Why do the leaves change colour and why are they all different colours?

So leaves start out green because of the chlorophyll, which is what plants use for photosynthesis to make up their food stores. Basically it helps them turn sunlight into sugar. I wish I could turn sunlight into sugar. No, wait, I wish I could turn sunlight into dark chocolate (which I suppose cocoa trees actually do already). There's usually so much chlorophyll you don't see anything else. Leaves also have other pigmented things in them - carotenoids (yellow/orange), tannins (a waste product - brown) and anthocyanins (produced later in the season - red/purple) but there is usually so much chlorophyll that these other colours don't show up. As the days get shorter the plants slow down their food production and the chlorophyll breaks down allowing the other pigments to show through.

Cool fact: A banana turing from green to yellow is the same process - losing chlorophyll to reveal the yellow colour!

The change is triggered primarily by the shortening days. The longer nights mean less sunlight to produce the sugars and slows the chlorphyll production. Leaves are pretty delicate - they wouldn't survive the winter here which is why at these lattitudes they go through the whole process of shutting down and losing their leaves only to grow them again in the spring. A good example of this is if you have your fridge up too high and the lettuce freezes - pretty useless wilty stuff. It's not all for naught though - the leaves decompose providing nutrients into the soil. Nature is pretty good at not wasting. There is some speculation that the anthocyanins in the soil from decomposing leaves will supress plant growth in those areas leading to less competition for the tree the next year. Not bad, nature, not bad at all. And on top of all that the leaves can provide some good habitat too. 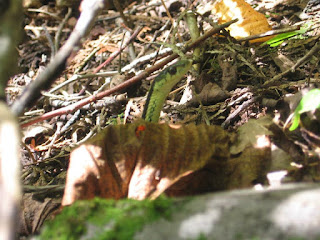 The actual colours themselves depend on what and how much of the pigments are in the leaves. The anthocyanins are not produced throughout the year though and are only present in some species and at different levels - which is why they don't all go red and we get the great variation. Yellows and oranges are already present and revealed as chlorophyll lessens. The type of summer and fall weather can have an effect on the production of these pigments as well, which is why some falls have more vibrant colours than others. A dry, sunny fall with temperatures that stay above freezing at night produce brighter colours. Species wise - oaks vary from reds to browns, aspen, poplar and birch go yellow; dogwood goes red. Maples vary - red maple not surprisingly goes bright red and sugar maple a more orangey-red. Sumac goes a lovely fiery red, which is why I plan to plant some next year.

I'm a bit late on this one as the colours have already pretty much finished here for the year, but if you happen to be around here Ontario Parks tracks leaf colour and timing in their parks - Fall Colour Report

So while we do have an abundance of crunchy leaves in the car, it doesn't lessen my love for the fall colours. I've been known to glue a few leaves to stuff myself.