Around here on rainy days we have to leave a bit of extra time to get to school. Not because of raincoats and boots, not because of traffic, and not because (ok, not entirely because) of jumping in puddles. It’s because of worm rescue.

If it’s been raining for a while there are usually a large number of earthworms on our driveway, which must be rescued from a potentially gruesome squishy demise from our car. The same goes for the school parking lots and the sidewalk up to school. Bunny wants to be an animal doctor (worms and insects are included in her definition of “animal”) and Beans thinks Diego ranks in the same realm as Batman (and she loves them both dearly), so not rescuing every single worm possible is unthinkable.

So the question was posed – why are all the worms out in the rain? If you think about it - they are creating a veritable buffet out of themselves for the robins and getting stepped on a lot. Those that don’t make it back to the lawns after the rain end up as worm jerky. Funnily enough, watching robins eat the worms is another favourite pastime which seems contradictory to this one but as Bunny put it “some of them are supposed to get eaten by robins, the robins won’t want them all squished”. It’s a valid point, I wouldn’t want my breakfast run over by a car first either.

So the question still stands though, why are all the worms out in rain? The original school of thought was that they came out to prevent themselves from drowning but recent research has shown otherwise. In fact, earthworms can survive several days underwater and require moisture in the soil for survival. So what is their real reason for surfacing? Migration! The surface moisture provides a quick mode of transportation for longer distances that isn’t available on sunny days. Or as Bunny put it “they have slime, they can’t slide on dry.” Though it seems worm evolution hasn’t yet caught up with the invention of pavement.

Another reason may be escaping predation – the vibration mimics that of underground predators and they surface to escape (only to be eaten by robins, so unfortunately it doesn’t always work out for them).

Even cooler? Research published in the journal Ethology showed earthworms swarming and using touch to communicate and make group decisions!

So there you have it. While I always knew the worm’s important place in terms of soil health and breakdown, I underestimated the complexity of their existence. Worms migrate, survive underwater, form herds and “research confirmed that social cues among earthworms influence behavior.” Not so different from us (well, except for the surviving underwater part – they’ve got us beat there).

I, for one, am going to treat the humble earthworm with a lot more respect from now on and perhaps rescue a few myself, even if the girls aren’t around. 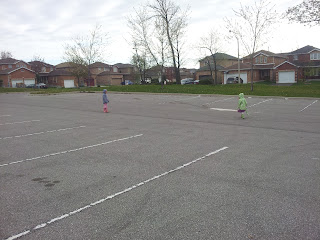